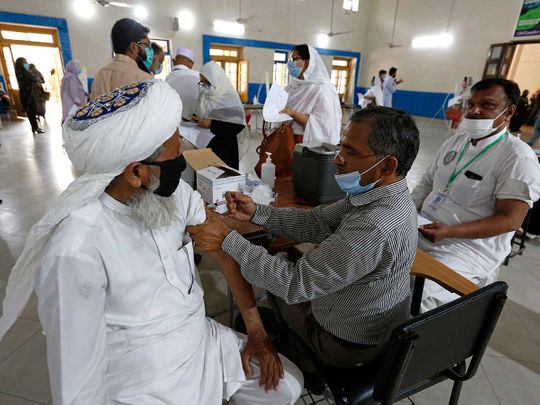 Islamabad: After announcing an easing of restrictions related to COVID-19, the number of cases as well as the positivity rate is slowly increasing but increasing in Pakistan. As of Sunday, more than 1,000 cases of COVID-19 have been reported in the past 24 hours.

According to the National Command & Operation Center (NCOC), Pakistan’s positivity rate was 2.57% on Sunday with 29 deaths and 1,228 confirmed cases of COVID-19 in 24 hours.

NCOC figures reveal that the number of active cases is also on the rise, from 32,319 on Saturday to 32,621 on Sunday.

Following recent protests from those who have to travel to the Gulf or to European countries to work or study, the positivity of the coronavirus in Islamabad has increased from less than 1% to more than 3% in the past seven days.

The protesters had argued that because of not administering the Pfizer or Astrazeneca vaccines – both are acceptable in the Middle East and in European countries – their jobs as well as their education were at stake.

They are now receiving the Moderna vaccine that Pakistan received from the United States two days ago. This vaccine is also acceptable in the above regions.

According to the district health department, the growing indifference of the population to follow standard operating procedures (SOP) for COVID-19 has also contributed to the return of COVID-19 cases to Islamabad. After tests, 71 people were found infected with COVID-19 while the positivity rate remained at 3.19% in the capital.

The Department of National Health Services (NHS) has decided to pay the COVID-19 health risk allowance to frontline health workers after a stint of nearly a year.

The ministry reluctantly agreed to pay the overdue amount after the Speaker of the National Assembly, Asad Qaisar, requested a report from the Secretary of Health on the non-payment of the health risk allowance to employees of the public hospitals in the capital.

Last year, the health risk allowance was paid to a majority of healthcare workers, but some complained that some of them were paid more than others.

During a session of the National Assembly on June 28, the speaker stressed that health workers had not received the COVID-19 health risk allowance for 11 months and had asked the secretary for explanations. Health.

After the speaker’s intervention, the ministry said in a letter on Saturday that hospitals had been asked to submit lists of healthcare workers, by July 5, who performed COVID-19 tasks.